Showing posts from September, 2018
Show All

Celebration of Life - Found a Venue

September 28, 2018
Nick's had a very peaceful past couple of days. We've been so grateful that had been given a double room all to himself on the 7th floor. We owe the nurses on duty big time, as we tended to be loud as the evenings wore on, and beverages were consumed. Oncology eventually needed to take C7-401 back for people needing treatment, so Nick's now in the palliative ward, C6-201. It's a double, semi-private room, all to ourselves, just like C7-401. We have a fresh crew of nurses to piss off with our antics! We've had some beautiful times at Nick's side. His friends have been telling us stories that reveal sides of Nick's personality that we've never known, and confirming the strength of his character we've certainly known. I seem to recall Nick being told about five years ago about a little girl, a friend of a friend, who was facing a particularly grim ordeal with cancer. Nick's plan was to visit her, but we never did learn of the outcome. Two nigh
Post a comment
Read more 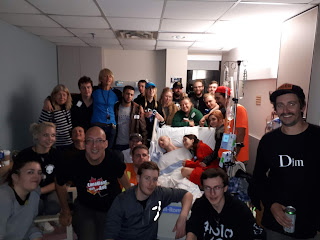 What a time this has been. We're beside ourselves with grief, sure, friggin' terrified of how we're going to survive without our beloved Nick, but we must say the outpouring of love and moral support we've experienced from all of you has kept us going. The steady stream of friends (some of whom are our colleagues from SDCI and WCI) and relatives have transformed the Cancer Ward into a party zone. Nurse Diana, and older lady with a stern Slavic/German (?) accent (and a heart of gold) had to reprimand us once. Once is all that's necessary from "she who must obeyed"...    ..."Chu vill be silent, macht schnell!!"  Nick's brother, Vincent, has been here at night. He's held up up incredibly well under the circumstances, and we're very proud of him. Alex (aka Florence Nightingale) has blown us away with her loving attention to her husband's needs. I think perhaps nursing, as opposed to being a dietitian, will be a more fitting car
Post a comment
Read more 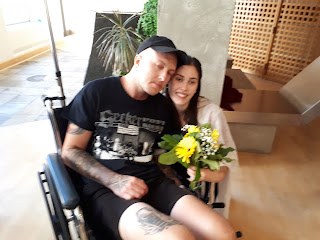 It's been among the hardest days our our lives, but not without its bittersweet moments. Nick and Alex got married today, in the hospital's Sanctuary, surrounded by dozens of friends and family who'd been streaming in all morning. We're so proud to have Alex, this incredible young woman who fears only butterflies, officially become part of our family (though of course she's been in our hearts for much longer). Congratulations Nick and Alex!
2 comments
Read more

September 23, 2018
I arrived at the cancer clinic at about 9:15 this morning, still wired after playing a great party in Bayfield, getting home at 2:00 am. Dr. Potvin had the results of the thoracic CT scan and the head MRI. The hope was that there might be on or two brain lesions responsible for Nick's dramatic neurological decline. No such luck. The cancer, grown chemo and radiation resistant, has proliferated in Nick's brain. There's no way to stop its growth, and it's ineroperable. Nick has days left. They're keeping Nick in hospital, as to send him home would result in horrific, traumatic consequences. The best they can do is try to make Nick's exit as peaceful as possible. Nick's six year battle is finally coming to an end. These six years have been trying, but we've not been without help, hope and support along the way. We love and deeply appreciate everyone who's had our backs during this time.
6 comments
Read more 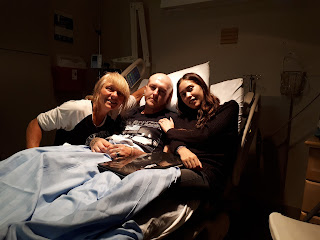 Treatment is underway at Victoria Hospital. The current regimen is given on a three week cycle, as usual, but with only 3-4 days in-hospital, thankfully. They're shooting Nick up with plenty of hydromorphone, so he's right out of it. Nick's hands are still pretty much incapable of gripping anything, so he needs help with dressing, eating and, er, self-medication (thanks, Alex!) The new chemo regime Nick's on is not platinum-based. Dr. Potvin figures that Nick's had so much cisplatin that the cancer is now resistant to it. So, the cocktail consists of four drugs, most of which Nick - and his cancer - has never seen before. Let's hope it kicks the cancer's ass once and for all. We don't know what the odds of this are - there just aren't sufficient data to give a probability of success. We just have to wait and see what happens. Nick had his head MRI and thoracic CT scans today, and we'll meet with Dr. Potvin early tomorrow to discuss th
Post a comment
Read more

September 19, 2018
It was a bad day for Nick on Monday. He had to leave class with a bad headache and significant visual distortion. This subsided a bit as the afternoon wore on, but early in the evening, he coughed up a frightening amount of blood. At this point he got in touch with us, and decided to head home yesterday to London to be examined by Dr. Potvin, his principal medical oncologist.  Nick's fiance Alex reported that he was kind of "stumbling around" upon arrival in London, and his attempt to play guitar when he got home did not go well, with Nick reporting a significant impairment in fine motor function.  He'll be attending her clinic today, and will be sent for a chest X-ray and bloodwork. More later.  ...Later (4:41 pm). Nick and Alex got back from the Cancer Centre. He'll be starting back in treatment tomorrow morning, as his tumour markers are at about 30,000. A head MRI will be ordered for tomorrow. I think he'll have to drop out of his program at Humber.
Post a comment
Read more

September 13, 2018
It's the 2nd week of school, and though we're all somewhat bushed by the early mornings, it's so good to be back to somewhat normal life. Nick seems to be enjoying his Funeral Director program at Humber. It was great to see his eyes light up when he picked up his embalming textbook. "Check this out - this dude blew his head off with a shotgun, and this is how you put him back together for an open-casket funeral. Wicked!". Someone's got to do this, I guess! Nick's still in treatment. This is to be expected, as his doctors did not feel that he could be sent into remission this winter. However, the treatment is relatively sustainable, and occurs every 21 days in hospital. The initial plan was to have him receive another hit of chemo at day 8, but as the day 1 dose really knocks Nick's platelets down, the day 8 dose was impossible. Nick's oncologist doesn't seem overly concerned by this, so we're not freaking out about it. The mid-July b
Post a comment
Read more
More posts